A Community Vision for the Future

First opened in 1917 but now vacant for almost 30 years, the Kingsbridge Armory is one of the Bronx's vital landmarks. Today, the City has a historic opportunity to redevelop the Armory, placing the needs and priorities of Bronx residents and business owners at the center of the process.

Beginning in the fall of 2022, New York City Economic Development Corporation (NYCEDC), local elected officials, and a working group of community leaders are partnering to launch an engagement process to understand the community’s vision for the future of the armory.

If you live or work in the Bronx, we hope you will be part of this process to build a collective vision for a future Kingsbridge Armory that contributes to the cultural and economic vitality of the borough.

NYCEDC and the local Bronx community are working together to build a collective vision for a future Kingsbridge Armory.

Composed of diverse community leaders, the working group will make sure the community’s voice shapes the future of the Armory.

Get involved! Learn more about upcoming opportunities to make your voice heard for the future of the Armory.

Scenes from our Public Workshop.

Workshop attendee and volunteer discussing history of the Armory in the local community.

Workshop attendees writing their ideas for the future of the Armory as part of a banner activity.

Audience listening to the Together for Kingsbridge Co-Chair’s speeches.

Audience listening to the Together for Kingsbridge Co-Chair’s speeches.

Taking up an entire block at the intersection of Kingsbridge Road and Jerome Avenue, the Kingsbridge Armory is the world’s largest armory and has long been a central landmark in Northwest Bronx.

Inspired by Medieval architecture, the Armory’s exterior is characterized by red brick, a curved and sloping roof, two semi-engaged towers, and two low round towers.

Entrance into the Armory’s head-house. The building has over 500,000 square feet of interior space, including a 180,000-square-foot open drill hall, a four-story head-house, a basement, and sub-cellar levels.

The Drill Hall was used by the military to perform drills, stage practices, and store equipment. In addition to military uses, the Kingsbridge Armory held exhibitions, boxing matches, film sets, and served as a temporary meeting place for the United Nations.

Entrance to the Kingsbridge Armory from Reservoir Avenue. Bronxite, Carl, has been managing on-site operations at the Armory for over 20 years.

Contact the Working Group to learn more about the community engagement process for the Armory and how you can get involved. 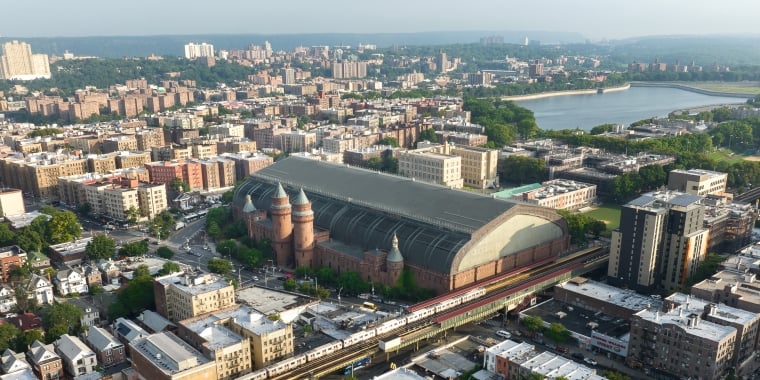